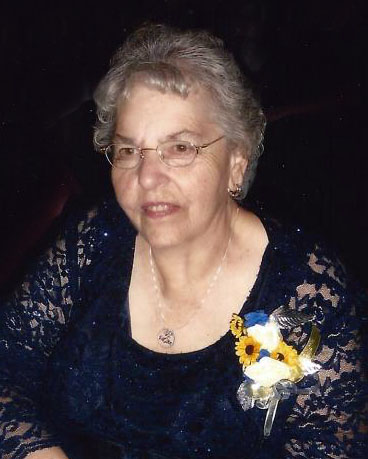 Ann I. Lambert, age 86, of Marengo, IL, passed quietly into the arms of her Savior, Friday, January 22, 2021. She is now reunited with the love of her life, and best dance partner, Ronald, as a celestial version of the Tennessee Waltz plays them through the gates of Heaven.

Ann grew up in the Lily Lake area and attended local schools. She graduated from Burlington Central High School with the class of 1952.

Ann’s cousin was dating one of two brothers and set Ann up with the other, Ronald Lambert. On a dare between brothers, Ronald proposed on the first date! No one remembers how much the bet was for, but Ronald and Ann ended up winning each other’s hearts, walking down the aisle shortly thereafter on April 27, 1957.

Following graduation, Ann worked in a label printing factory for a time until her family began to grow.

Ann was a member and past president of the Elburn American Legion Women’s Auxiliary, a 4-H Leader and a member of the United Church of Christ in Wasco where she participated in the prayer shawl group.

Ann’s hands worked tirelessly as she crocheted afghan after afghan, sometimes one per week, for family friends and those in need through the prayer shawl group at church. She also was able to put them on display at the county fair, where she often won accolades, and most times brought home a first-place ribbon. If you knew Ann, chances are you have an afghan made with love and prayers in every fiber. Her garden was huge and so was the bounty every harvest. She planted and tended it with a careful eye, and she was quick to correct if something was not according to her plan. The family helped, with close supervision, making sure the garden grew in harmony.  Long drives with Ron made memories with every mile as they dreamed of their future. At the local Moose and various weddings, the dance floor would clear as the Tennessee Waltz began to play, leaving everyone to marvel at the class and grace of “Ann and Ronnie”. Her family rejoices in the blessings they received, and the release Ann received at the end of a life well lived and deeply loved.

In lieu of flowers, a memorial has been established in Ann’s name. Checks may be made to the “Ann I. Lambert Memorial” and mailed in care of P.O. Box 66, Elburn, 60119. Tributes and memories may also be forwarded to the same address, on the Conley Funeral Home Facebook Page, or at www.conleycare.com, where you can see her full life story.