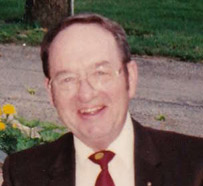 Charles W. Williams, age 88, of Glen Ellyn, formerly of Blandinsville, IL, passed away surrounded by his nurse & staff in the COVID Unit at Tabor Hills Healthcare Facility, Naperville, IL on Thursday, November 5, 2020. His wife and daughter were able to talk to him via video calls during his last three days. “Hearing is the last sense to go” it is said. We talked and sang to him much through those last days and were glad to be able to do so.

He was born an only child in Blandinsville, IL, on September 8, 1932, to proud and loving parents, Fay and Frances (Foster) Williams.

Charles grew up in the Blandinsville IL area on the family farm and worked daily to help his family. He attended local schools and graduated from Blandinsville High School with the class of 1950.

He continued his education at Western Illinois University and graduated with both a Bachelor’s and Master’s Degree. Eventually, he received an MBA from University of Illinois, and later attended Loyola University where he graduated in 1970 with a J.D. degree.

He met the love of his life, Sandra Haney, in the fall of 1957.  The two grew up in the same area and a friendship bloomed into love as the two exchanged vows on June 25, 1961. They began their life together in Downers Grove IL where Charles worked at the Department of Atomic Energy, located at Argonne in those days. They bought a house a few years later in the Glen Ellyn area where they lived for ten years. Six years were spent at Rochester IL, and in 1978, they returned again to the unincorporated Glen Ellyn area for the remaining years of their marriage.

After receiving his law degree, Charles worked with Robert F. Scott in Springfield, IL for several years, before being hired by Housing & Urban Development (HUD) Legal Department in Springfield IL. The Springfield office closed after only one year and Charles and Sandra returned to the Chicago area, settling again in unincorporated Glen Ellyn, where Charles worked at (HUD) Legal Department on Jackson Blvd. in Chicago IL, until retiring in 2012.

Charles was a lifelong member of the Lions Club, first in Rochester in 1976, and later in Lisle IL (1978) where he became District 1J Governor from 1992-1993.  He also was a member of the Cook/DuPage County Beekeepers Association where he served as Secretary for many years.

Charles loved to peruse flea markets and garage sales, bringing home “treasures” he found, though the definition may have been different in Sandra’s eyes. Countless ball point and fountain pens found their way into a “priceless” collection that was close to his heart. He was an avid reader and began collecting books but found solace in writing in his daily journal. Charles was a multifaceted person whose interests cast a wide net. Conversations between Charles and Sandra were often deep, sometimes wide ranging, and always enjoyable. The greatest treachery came in late 2015 when he began to suffer from dementia, hiding the volumes upon volumes of information he nurtured and collected over decades of study. Never one to give up easily, his spirit continued to stay strong, but his health decline brought him sweet release from the chains that bound his mind.

He is preceded in death by his parents, Fay and Frances Williams, one daughter, Susan L. Williams, and a son-in-law, Joseph P. O’Mahoney.

A Celebration of Life service will be held at a later date at the Elburn Lions Clubhouse when it is safe for all his family and friends to gather.

In lieu of flowers, contributions may be made to the Lions of Illinois Endowment Fund, 700 N. Peace Rd, Suite B, DeKalb, Illinois 60115 . Tributes may be left on the Conley Funeral Home Facebook Page, or at www.conleycare.com.