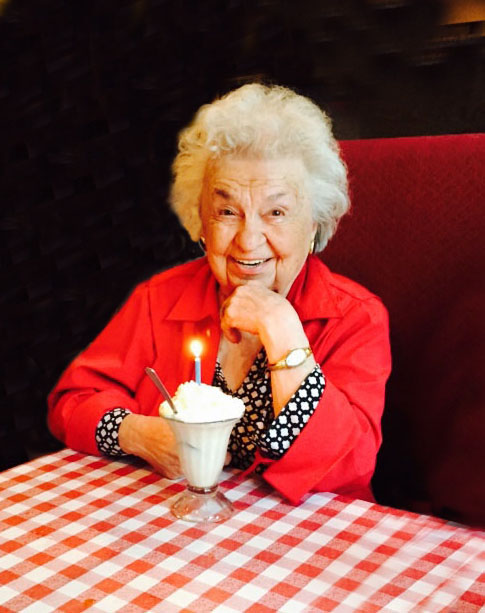 Dorothy “Doe” Pingel, age 92, of Geneva, IL, formerly of Maple Park, passed away peacefully, following complications from a recent stroke, Tuesday, February 16, 2016, at Arden Courts, Geneva.
She was born August 30, 1923, in Hinckley, IL, the daughter of Elmer and Myrtle Riedelsperger.
Dorothy grew up on the family farm in rural Hinckley, IL. She attended local schools and graduated from Hinckley High School, but not before excelling in her favorite class, Home Economics.
During the war, Dorothy lived with her Aunt in Chicago while working at Walgreens as an Ad-Copy Proofreader. Five years later, she came back home to work at Wurlitzer Piano Factory in DeKalb. Following Wurlitzerâ€™s closing in 1972, Dorothy became the office manager for Pingel Equipment in Maple Park until her retirement 2004.
Dorothy met Wilbur Pingel in her home town before he went off to war. She wrote to him during his service time and they reconnected when he returned to civilian life. They walked down the aisle on October 8, 1949.
They lived in several locations in Maple Park. In each one, Dorothy was sure to make everyone feel welcome. Following Wilberâ€™s passing in 2002, Dorothy continued to make her home in Maple Park along with her sister-in-law, Juanita, for seven years before declining health brought her into the care of Arden Courts in Geneva, IL.
Dorothy was a longtime volunteer at the Maple Park Library and you rarely voted without Dorothy sitting in as a volunteer judge. Although she loved to support her community, Dorothy really loved to be wherever she could strike up a conversationâ€¦whether she knew you or not!
Although Dorothy spent her life in Maple Park, she had a pair of dancing shoes to rival all. She cut a rug not only at Longâ€™s Barn, but also at the Aragon Ballroom in Chicago and even won a dance contest in the city. She danced so much, she would wear out a pair and have to collect shoe war ration coupons (some of which came from family and friends) to buy a new pair. Wilbur and Dorothy went to all the local county fairs to hear numerous country artists take the stage. As the sun made its appearance, Dorothy made fresh baked goods and eight 10-cup pots of coffee a day, so no matter who you were, or what time it was, it was always time to stop in and sit a spell with Dorothy. “Mr. Coffee” burned through at least a 3lb can a week without slowing down. There was so much coffee being brewed, they kept at least one coffee maker in reserve. She was a night-owl (which may or may not have anything to do with the aforementioned coffee) and regularly watched Johnny Carson, as well as the “late-late show” before she turned in for the night. Morning was a different story for Dorothy, but she was running on all cylinders by the afternoon without fail. Dorothyâ€™s view on baked goods and coffee, extended to lunch time when she laid out an incredible spread for her husband, brother-in-law, and anyone else who missed out on breakfast. Dorothy loved company and was always on the lookout for who was coming into (or leaving) town through her kitchen window which looked out onto County Line Road. Dorothyâ€™s passing brings sadness to many, but no doubt she is happy with her new “window” through which she can continue to keep an eye on all the comings and goings of her beloved community.
She is survived by many nieces and nephews and a community of good friends.
She is preceded in death by her parents; husband Wilbur; one brother, Glenn Riedelsperger; in-laws: Ray, John and Lawrence Pingel, Lorraine Moehling and Eddie Pingel.

In lieu of flowers, donations may be made to Alzheimerâ€™s Association Greater Illinois Chapter
8430 W. Bryn Mawr, Suite 800 Chicago, IL 60631. Tributes may also be forwarded to the Conley Funeral Home Facebook Page or on the web at www.conleycare.com.