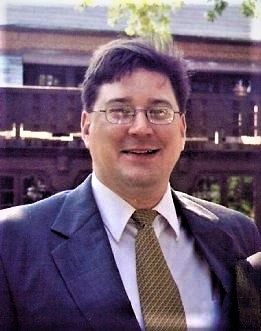 Edward Richard Swiderski II, of Elburn, passed away Monday, September 14, 2020, into the arms of his Savior following a battle with liver disease. His body may have broken, but his spirit stayed strong and was lifted up by the love and prayers of his family until he was freed from his afflictions.

Ed grew up in Park Ridge, IL, and attended local schools. He graduated from Main South High School with the class of 1983. He lost his dad when he was young and much of his advancement came from within. Ed played the saxophone in the high school band, his musical abilities coming from his father who played in a locally famous polka band, The Naturals. Before receiving his diploma, Ed made a name for himself in the academic halls of his high school; if there was an advanced class, Ed took it and aced them all, culminating in graduating with honors.

Ed met the love of his life, Mariann O’Malley, in downtown Chicago. Mariann’s sister was a runner for an exchange and brought Mariann along to celebrate some of the night life. From that night on, Ed had no eyes but for Mariann and they united in marriage on May 16, 1997. They began their new life together in a brand new home built in Bartlett. They made Elburn their home in 2007 and continued to raise two sons, Edward Richard III and William “Liam” Joseph Swiderski.

During college, Ed found work at an Options Exchange Firm but following graduation, Ed was employed by Merrill Lynch. Several years later he would move on to a number of businesses and firms as a senior network engineer, making his mark at every stop.

Ed was very technologically inclined and what he didn’t know, he learned on his own, taking pride in every achievement. Whether it was work related or taking apart the dryer or fixing his own car, Ed thrived and rose to every challenge. His aptitude for knowledge was only rivaled by the love he had for his family, especially his two sons. Ed loved science fiction and all its facets, including Star Wars, Star Trek, Battlestar Galactica and more. He was an avid comic book aficionado whose collections were of catalogued, preserved and precious. The family enjoyed road trips to the Outer Banks, Tennessee and especially Door County, spending time at Fish Creek. Many memories of nature walks, bon fires, and boating were made, but Ed especially loved going on his own “treasure hunts” at local thrift and antique stores. He was an “American Picker” at heart and his treasures were thoughtfully and lovingly displayed at home. Lists were always being made and projects planned, with nothing left to chance. His partner in crime was his brother-in-law Tom, a duo that banded together in the face of “O’Malley Girls”, keeping them in stitches. Ed built his life and his home to cherish and now leaves his legacy for his family to treasure.

He joins his father, Edward Richard Swiderski Sr., his sister-in-law, Jennifer Ruffner; maternal grandmother Helene Betty Janicke; his mother and father-in-law, Joan and William O’Malley who preceded him in death.

A Memorial Mass to celebrate Ed’s faith will begin at 10 a.m. at St. Gall Catholic Church, 43W885 Hughes Rd., Elburn, IL, on Tuesday, September 22, 2020. Fr. Max Striedl, pastor of the church, will officiate with private family burial will follow at a later date.

In lieu of flowers, a memorial has been established in Ed’s name. Checks may be made to the “Edward Richard Swiderski II Memorial” and mailed in care of P.O. Box 66, Elburn, 60119. Tributes and memories may also be forwarded to the same address, the Conley Funeral Home Facebook Page, or at www.conleycare.com.