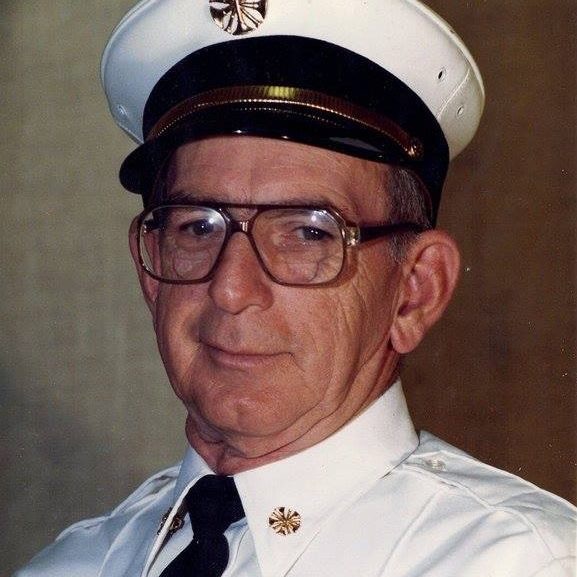 Elmer T. Hughes, age 90, of Genoa, IL, passed away peacefully on the evening of Friday, November 2, 2018, surrounded by the love and prayers of his family.
Elmer was born on March 28, 1928, in Bevier, MO, to proud parents Raymond and Jewel (Jones) Hughes.
As a child, he moved with his family to Sycamore, IL, where he attended local schools. While he was finishing up his senior year at Sycamore High School, Elmer went to serve in the United States Navy, and was honorably discharged due to medical reasons. After his return, he went to a local college to finish out his senior year and earned his high school diploma.
After Elmer graduated, he worked for Anaconda Wire and Cable in Sycamore for 34 years where he held many different positions until they closed their doors. He then went to work for Falls Products in Genoa for five and a half years, until they closed their doors as well. Elmer worked at Tobinsonâ€™s Ace Hardware for the next 19 years before retiring.
Elmer and Alice “Jean” Wager attended a football game on their first date, October 17, 1947. In January of 1952, following a four and a half year courtship, Elmer proposed to Jean at his home in Sycamore. On the 29th of June they were united in marriage, but they always celebrated their anniversary on October 17th because of that special first date. They lived in Sycamore for a short time, but when they found out Jean was pregnant, they decided to move to her hometown of Genoa, IL. They moved into the house her family owned and lovingly called “The Little House.” Patricia Jean was born in August of 1953 and their family of two became three. In 1964, they moved from “The Little House” to a house they built right next door.
Elmer always stayed busy with his passions outside of work. In 1955, he became a volunteer firefighter at the Genoa Fire Department. He served as the fire chief for a time and served on the Board of Trustees until he retired after a 57 year commitment. Elmer was so much a fixture on the fire department that when the City of Genoa received a brand-new fire engine, the firemen stopped by his house to show him before they had even gotten the new truck to the fire department.
He was also a member to the Genoa Lions Club and the Sycamore Elks Club. In 1966, Elmer organized and started the Genoa-Kingston Athletic Booster Club with the help of coaches and others. In addition to his work at the Booster Club, Elmer was a time keeper for the Varsity Basketball team for 35 years and never missed a game. Due to his enthusiasm for the basketball team and the Booster Club, in 1977, Elmer was inducted into the IBCA Hall of Fame as a Friend of Basketball.
Elmer was always a part of the community in some way, and in 2015, he was nominated as a Hero in the Tribute to Heroes Tri-City Counsel Awards Ceremony for DeKalb County. He received the award from the Tri-City Counsel for his dedication to his community. He was Mr. Fix-It at Ace Hardware and almost everyone in the City of Genoa knew Elmer T.
At home, Elmer kept just as busy maintaining his property and spent time in his back garage working and relaxing. Jean was just as busy as Elmer; whatever he was working on, Jean was working right alongside of him. Because Elmer was a volunteer firefighter, he was always on call. Many times, when Elmer was running out the door, his daughter Pat was right behind. She enjoyed their time together on calls just as much as he did.
In their spare time, Elmer and Jean loved to travel and go on vacation. They never went to the same place twice and saw everything from New York City and the East Coast to California and the West Coast. Both were eager to stop and see places off the beaten path.
When Pat had kids of her own, Elmer was the happiest of grandpas. He had the ability to make his grandchildren and great-grandchildren smile, no matter what. This was perhaps because he was sneaking them a cookie, offering them a lap to sit on, or making a silly face when Jean and Pat werenâ€™t looking. Family was always important to him. Elmer leaves behind his family and his loving wife of 66 years; they were never apart, from the beginning to the end.
Elmer is survived by his wife of 66 years, Jean Hughes; his daughter, Pat Clauss; three grandchildren: Natalie (John) Seper, Nathan (Kelly) Campbell, and Clint (Hope) Clauss; seven great-grandchildren: Christopher, Ian, and Kevin Seper; Nolin and Wade Campbell; Jacob Arnold and Levi Clauss; his sister, Blanche Eva Carlson; several nieces and nephews and a whole city of friends.
He is preceded in death by his parents, Ray and Jewel Hughes; his father and mother-in-law, Clarence and Edith Wager; his son-in-law, Brian Clauss; his brother and sister-in-law, Eugene and Laura Hughes; his brother-in-law, Glenn Carlson and his nephew, Gregory L. Hughes, Sr.
Visitation will be on Friday, November 9, 2018, from 4-8 pm at Faith United Methodist Church, 325 S. Stott St., Genoa, IL, 60135. A funeral to celebrate his life will be held the following day at 1:00 p.m., Saturday, November 10, 2018, at Faith United Methodist Church. Interment will follow at Genoa Cemetery, Genoa, IL.
In lieu of flowers, a memorial has been established in Elmerâ€™s name. Checks may be made to the “Elmer Hughes Memorial” and mailed in care of P.O. Box 66, Elburn, 60119. Tributes may also be forwarded to the same address, the Conley Funeral Home Facebook Page, or at www.conleycare.com.

A funeral to celebrate his life will be held the following day at 1:00 p.m., Saturday, November 10, 2018, at Faith United Methodist Church