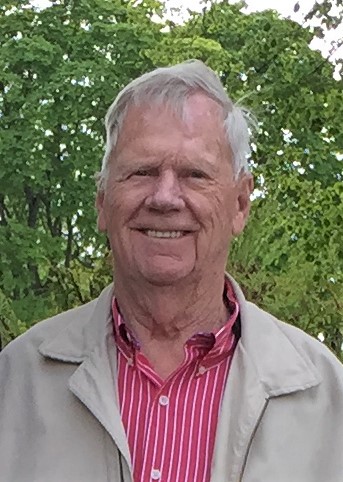 John E. Flodstrom, 86, passed away on November 1, 2018, when his worn and loving heart chose that day to come to a gentle stop. A famously witty man (probably because he and Bob Hope went to different schools together), John kept us laughing until the end.

John was born on May 30, 1932 in Wisconsin Dells. His Swedish immigrant parents, Sven and Karin Flodstrom called him “Johnny.” John graduated from Batavia High School in l950. On September 18, 1954, he married Esther McConnaughay and began a 34 year career with AT&T.

As a young man, John, (nicknamed “Trapper” and “Floody”), was known for air and water antics few would attempt. As a paratrooper for the 82nd Airborne Division, the first time John was ever in a plane was the first he ever jumped out. He made 25 more jumps. A few years later, he bought a Piper Cub and flew it homeâ€”before taking a single flying lesson.

John joined the Batavia Ski Club executing flips, jumps, and skiing barefoot and backwards for audiences on the Fox River, often dressed as a clown wearing oversized shoes for skis. He also raced canoes on the Fox.

However, John spent most of his life on the ground moving earth. In his 30â€™s, he and Esther bought a rocky 18-acre pasture full of holes, thistles, and scraggly trees on Jericho Road in Big Rock. He fashioned that rugged piece of land into a showplace that John and Esther named Triple JK Ranch after their six children.

Johnâ€™s greatest accomplishment of all was after he retired from AT&T. He spent countless hours on his backhoe digging up the ground of the Triple JK Ranch and completely reshaping it into the wildly successful 9 hole Deer Valley Golf Course. He and Esther sold their golf course in 2001 and moved to a lake front cabin on Lake Arrowhead in Nekoosa, Wisconsin.

In Nekoosa, John became a bird man. He loved purple martins, a picky bird to attract. He designed and built several huge state-of-the-art houses. He raised and lowered his bird hotels with his own specially devised pulley system. The houses had to be set at exactly the same angle each year or the purple martins would fly right past them, never to return. Each spring, when new babies hatched, he lowered the houses, picked up each tiny bird, removed the mites that often killed them, and then carefully returned them to their home. Hundreds of purple martins flocked to his backyard every year.

Johnâ€™s heart began to slow him down at age 78, so he reinvented himself yet again and became a reader for the first time. John often devoured two books a week. Westerns were his favorite. Who knew John could be so happy sitting on the couch with his nose in a book?

John was preceded in death by his parents and a brother, Ingemar, of southern Sweden.

He is survived by his exceptional wife and business partner, Esther, five doting daughtersâ€”Karin Flodstrom of Thiensville, Wisconsin, Janet Lagerloef and Jerry of Sugar Grove, Kelly Tadie and John of Oswego, Katy Sommerfeld and Dave of Oswego, Joanna Olson and Matt of Somonauk and his only son and proud namesake, John Flodstrom and Jill, of Champaign.

Known as Bapa, Far Far, and Papa, John is also survived by 13 grandchildren and 8 great grandchildren, who will keep the tales of his extraordinary life alive for generations to come.

John also leaves behind a tightly knit family of siblings: three sisters, Dorothy Patzer (the late Raymond Patzer) of Batavia, Marguerite Larson (the late Robert Larson) of Ottawa, Canada, and Maj Olausson of Tollsjo, Sweden, along with three brothers, Gust Flodstrom (the late Elizabeth) of Batavia, Sven Flodstrom and Patricia of Geneva, and Karl Flodstrom and Kathryn of Batavia, as well as adoring nieces, nephews, and as many friends over the years as he had purple martins.

John will be interred in a private ceremony at the River Hills Memorial Cemetery in Batavia.

An open house to celebrate the life of John Edwin Flodstrom will be held on November 17, on the upper floor of the Batavia VFW, 645 South River Street, from 4:00-9:00 p.m.

In lieu of flowers, donations may be made to the Batavia Historical Society/Depot Museum, 155 South Houston Street, Batavia, Illinois, 60510.

An open house to celebrate the life of John Edwin Flodstrom will be held on November 17, on the upper floor of the Batavia VFW, 645 South River Street, from 4:00-9:00 p.m.

John will be interred in a private ceremony at the River Hills Memorial Cemetery in Batavia.