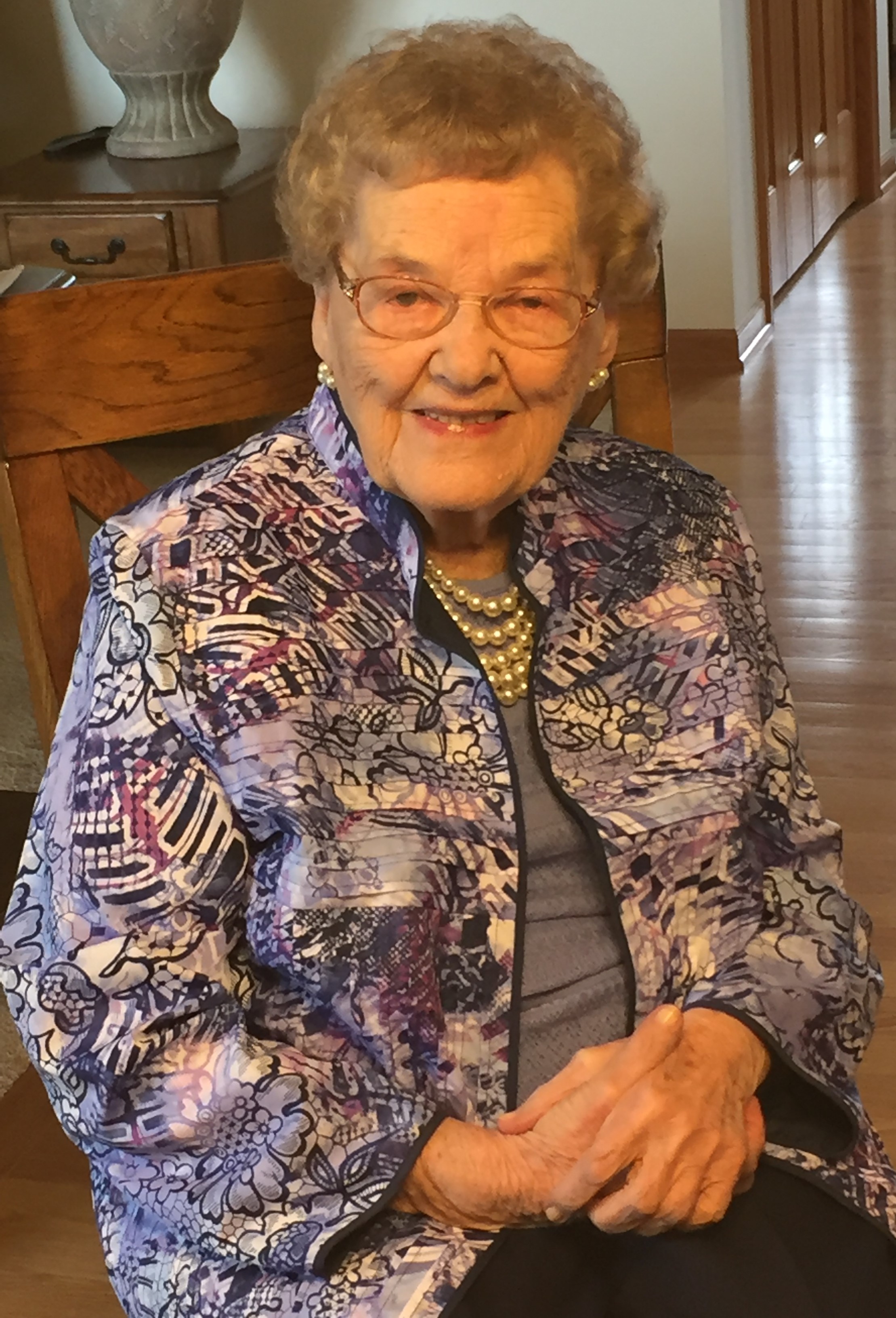 Kathryn “Kay” Jennings Probst, passed away peacefully September 9, 2018, once again reunited with her beloved “Buster” in that house not made with hands.
Kay was born on May 16, 1923, in Van Meter, IA, the sixth daughter of Roy and Alma (Kimmey) Jennings. She grew up on a farm with her five siblings until 1940 when the family moved to Elburn, IL where Kay graduated as Valedictorian from Elburn High School in 1941. Following graduation, she completed a two-year business program at Elgin College and then worked as a teller at the Kane County Bank in Elburn.
Kay met Robert (Bob) Probst at a dance for a Rural Youth group in St. Charles. She came home from their first date and told her sister that she had met the man she was going to marry. After a one year courtship, Bob and Kay were married on January 16, 1946, in Elburn. They farmed in Sugar Grove initially, then rented, and later purchased a farm in Troxel. In 1955, they purchased a farm on Keslinger Rd., near Kaneland High School. They moved to make their home there in 1960 continued to live there until 2004 when they moved from the farm to town (Elburn).
Kay and Bob were blessed with three sons and one daughter. They were married for 60 years before Bobâ€™s death in 2006. After Bobâ€™s death, Kay moved into assisted living and memory care residences in Sycamore to be near her daughter. She enjoyed the music programs and cooking activities there. Kay had six grandchildren and fifteen great-grandchildren with one more expected in a couple of weeks. She was known as “Grandma Kay” to many children who were friends of her own grandchildren.
Kay worked at the Kaneland Junior and Senior High School as a cook for about ten years. She often made rolls or sheet cakes for 600 students. A friend opened a clothing store (Country Flair) in Elburn and Kay worked as a sales associate at the store for a few years in the late 1970â€™s.
Kay was a member of the Community Congregational Church in Elburn for over 70 years. She served on numerous church committees, served countless funeral lunches and helped with the preparations for the annual Harvest Dinner. The church had a food booth at the annual Elburn Days festival and Kay was one of the primary pie bakers for the over 100 pies that were needed on that weekend. She also volunteered at Geneva Community Hospital Hi-Hat House resale shop, retiring from that activity when she was 80 years old. She served as an election judge for many years in Kaneville Twp.
After farming for twenty years, Bob became an insurance agent. Bob and Kay took many fun trips that Bob won for being a top salesman. Some of their destinations included Hawaii, Ireland, Germany, Italy, the French Riviera, Brazil, the Bahamas, New Zealand and Australia. They also travelled in a motor home with friends to the Northeast to see the beautiful fall foliage. An Alaskan cruise was another favorite trip.
Kayâ€™s favorite pastime was playing cards. For approximately forty years, Bob and Kay were in two card clubs that met monthly. One club played 500 and the other played Pinochle. She also played cards every Wednesday afternoon with four other ladies for over twenty years. Kay was very com-petitive and a stickler for following the rules. You did not play a card and then change your mind and try to pick it up. Kay would not allow that in her house! Ceramics was a hobby she enjoyed. She took weekly ceramic classes at a neighborâ€™s house and made beautiful ceramic pieces for herself and many family members to display and enjoy in their homes.
Kay loved to bake and was famous for her pies, cookies and sticky buns. Her sticky buns were required at all holiday family gatherings. Her favorite flower was the iris. Bob planted over ten varieties of iris at their home in Elburn for Kay to enjoy. She had numerous iris items that she collected over the years. Kay also collected cups and saucers. Many of the cups in her collection were purchased on their trips around the U.S. and the world, while others were special gifts from friends and family.
Kay lives on in the hearts of her friends and family. She is survived by one son, Michael (Melodee) Probst and one daughter, Virginia (Bob) Farley; six grandchildren: Michelle (Dale) Merrill, Alyson (Randy) Higgins, James (Julie) Probst, Jason (Kristi) Probst, Eric (Michelle) Jones, and Mark (Crystal) Jones; fifteen great-grandchildren: Sydney (Trent) Smith and Austin Merrill; Collin (Amanda) Probst; Kaylee, Kyler and Kenna Probst; Katherine and Elizabeth Higgins; Simeon, Elias and Isaiah Probst; Liam and Evan Jones; and Audrey and Valerie Jones (with another Jones due in a couple of weeks).
She is preceded in death by her parents, Roy and Alma Jennings; her husband, Robert L. Probst; two sons, Robert Charles Probst in infancy and Ronald L. Probst; five sisters: Alice Jennings, Ardith Mick, Mildred Morris, Ruth Lanning and Helen Rodgers.
A visitation will be held from 2:00-5:30 p.m., Thursday, September 13, 2018, at the Elburn Community Congregational Church, 100 E. Shannon St., Elburn. A funeral service will follow at 6:00 p.m. also at the church. A private family burial will take place at a later date.
In lieu of flowers, a memorial has been established in Kayâ€™s name to benefit her favorite charities. Checks may be made to the “Kay Probst Memorial” and mailed in care of P.O. Box 66, Elburn, IL 60119. Tributes may be forwarded to the same address, on the Conley Funeral Home Facebook Page or at www.conleycare.com.

A funeral service will follow at 6:00 p.m. also at the church.

A private family burial will take place at a later date.