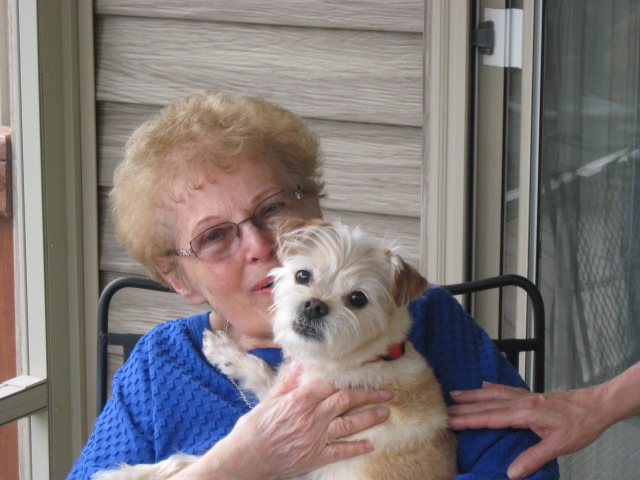 Loretta J. “Lola” Wojewoda, age 90 of Elburn went to be with her Lord on Wednesday, January 11, 2017 at Delnor Community Hospital in Geneva.
Loretta was brought into this world on Wednesday, December 29, 1926 in Chicago the daughter of Adolf and Stephanie “Stella” (Gorka) Stroka. Later her mother married Lorettaâ€™s step-father, Lewis Woelflin.
She grew up all over the city of Chicago, always in an apartment and always with her entire family. Lorettaâ€™s home had everyone from her grandparents and parents to her 7 aunts and uncles. Her grandfather was a shoe repairman and her grandmother was the homemaker. When Loretta was in school, every day on her lunch break her grandmother needed her to come home and take her grandfatherâ€™s hot lunch to him and run back home to eat her lunch, and then back to school in time for her next class. Immediately after school Loretta was expected to head straight home, pick up a shopping list from her grandmother and go to the store for that evenings dinner ingredients. As she grew older, she became a little rebellious. Loretta would maybe linger a little longer after school and not get home in enough time to get the groceries her grandmother needed. Loretta always enjoyed taking trips to Maywood Park with her step-father to spend time with his family. Her step-father enjoyed taking Loretta and her mother out there so they could get away from the city and have some play in the farmland and have a little freedom. Lorettaâ€™s mother worked in a candy factory and Loretta always enjoyed the times when her mother would bring home the left over candy.
In the Jewish and Polish neighborhoods of Chicago Loretta would soon meet her forever love. The mother of this young Polish man, who looked like a gangster with his jet black slicked back hair, suggested Loretta and her son should date. That young man was, Raymond Wojewoda. Raymond and Loretta were married on July 6, 1944 in Chicago.
After a number of years of marriage Loretta took a job to help pay the bills at home. She worked for Croname Manufacturing for more than 30 years. She loved working for a company where she could wear so many hats. Loretta went from being a secretary to filling the orders. After the company closed she went to work for Tropar Trophy Sales in Melrose Park. Loretta worked for them for many years as was in line to be promoted until needing to step away for family reasons.
Loretta absolutely loved being around people, her friends and family were her life. After losing her husband Loretta moved out of the city to Schaumburg, IL. She quickly enjoyed going out on the town with friends. In 2002 she moved to Hunt Club in St. Charles and lived there for 4 years. She then moved in with her daughter and son-in-law in Elburn. Loretta loved going to the movies and watching movies at home. She was okay watching the old 1940â€™s films, comedies and even romance alone, but when it came to watching mysteries, she needed someone there next to her to hold their hand. Among other activities Loretta enjoyed spending her time taking bus trips to the North Avenue Beach in Chicago to have picnics with friends or family. Later in life Loretta just appreciated her time at home working on crossword puzzles. She would do everyone in the Chicago Tribune. Loretta felt crossword puzzles were a kind of mental gymnastics to help her mind stay sharp as she grew older.
She leaves behind her daughter; Patricia (Ronald) Marcinek, one son; Robert Wojewoda, three grandchildren; Eric Marcinek, Sandra Lynn (Penn) Ellletson and Julie (Joseph) Rzepka, one nephew Jack (Eleanor) Wojewoda and one niece-in-law Veronica “Ronnie” Wojewoda.
Loretta now joins her parents, husband, a daughter-in-law; Linda and one nephew; Wayne Wojewoda.
A visitation will from 5:00-9:00pm, Friday, January 20, 2016 at the Conley Funeral Home in Elburn, 116 W. Pierce Street. A private family graveside service will be Saturday, January 21, 2016 at St. Michael the Arc Angel Catholic Cemetery in Palatine.
In lieu of flowers, a memorial has been established in Lorettaâ€™s name. Checks may be made to the Northwestern Home Health and Hospice Care and may be mailed in care of P.O. Box 66, Elburn, 60119. Tributes may also be forwarded to the same address, the Conley Funeral Home Facebook Page, or at www.conleycare.com.