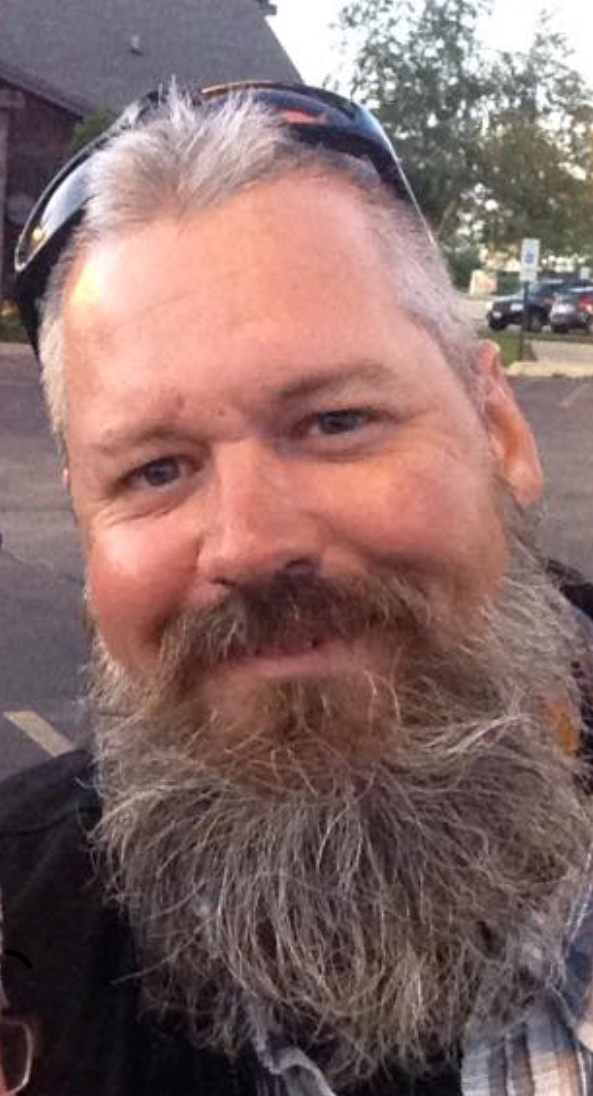 Mike Merrell, age 46, of Elburn, formerly of Batavia, IL, passed away unexpectedly, Friday, September 14, 2018.
He was born Robert Michael Merrell on August 8, 1972, in Winfield, IL, to proud parents, Brent and Sharon (Couture) Merrell.
Mike grew up in Warrenville and attended Holmes School for the first few years. The family moved to West Chicago and later Batavia in 1983, where Mike continued his education at Batavia High School.
Mike was interested in welding and began his career at Botts Welding and Truck Service in Woodstock, IL. Preventative Maintenance in Geneva was his next stop before joining the Iron Workers Local #399. During off times, Mike used his CDL driving truck. Later, he started working for White Brothers Trucking, Wasco, and most recently NEW Transportation in Virgil where he specialized in overweight and oversized loads
Mike and Angie Nelson met through a mutual friend. Their bond was unbreakable and their love was “sweeter than honey”. Together for nineteen years, they made thousands of memories and created a home, while supporting each other in their individual interests.
Mike had a reputation that seemed to precede him wherever he went. “He never met a stranger”, was a common refrain when people remember Mike. He could walk into a room where he knew no one, and in less than three minutes, heâ€™d be in deep conversation with no less than four people. A friendship with Mike was a friendship for life, no matter how many miles or years intervened. He loved his motorcycle and “got into the wind” at every opportunity. Many times he logged miles alongside friends and family, making memories at every turn. Mike also loved to spend time behind the microphone, singing in various bands since he was young. If a mic wasnâ€™t available, then he was center stage in the truck, in the shower, or wherever a juke box could be found. Suffice it to say, music played a special part in his life. Mike loved to go fishing in Northern Wisconsin surrounded by both his and Angieâ€™s family. Holidays spent at the cabin were unforgettable and enjoyed by all.
He is survived by his one and only, Angie Nelson; His mother, Sharon Merrell; his father, Brent Merrell; one brother, Kristian Merrell; his “mother-in-law”, Cheryl Nelson; several cousins, aunts, uncles and an untold number of friends across the countryside.
He is preceded in death by his maternal grandparents, LaVella and LaVerne Couture; his paternal grandparents, Robert Neil and Muriel Merrell; one aunt, Peggy Witt; two cousins: Patti Lynn Kosin and Tony Luchesi and his “father-in-law”, Daniel Nelson.
A memorial visitation will be Saturday, September 29, 2018, from 2-5:30, with a service to follow at 6 p.m., at Conley Funeral Home, 116 W. Pierce St., Elburn, IL 60119. Private family burial will follow at a later date.
In lieu of flowers, a memorial has been established in Mikeâ€™s name. Checks may be made to the “Robert M. Merrell Memorial” and mailed in care of P.O. Box 66, Elburn, 60119. Tributes may also be forwarded to the same address, the Conley Funeral Home Facebook Page, or at www.conleycare.com.
The family would like to invite all those who are attending to dress comfortably.

Private family burial will follow at a later date.