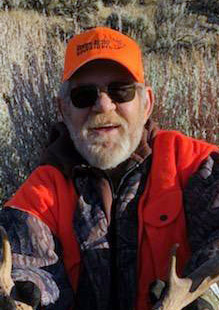 Randy A. Greenman,age 71, of Readstown, WI, formerly of North Aurora, IL, passed away suddenly at his home, Tuesday, June 29, 2021, surrounded by his loving wife.

He was born August 31, 1949, in Aurora, IL, to his loving mother Dolores, to whom he was devoted. Randy grew up in Aurora and attended local schools before enlisting in the United States Army on March 11, 1968. He proudly served his country as a radio operator in Vietnam before his honorable discharge on October 15, 1969. Randy returned to civilian life back in Illinois.

Randy met the love of his life, Suzzane Medernach in 1982. They began their new life in North Aurora where they resided for three years before moving to “God’s Country”. Randy “decided” to make Suzzane his wife and they were married on July 16, 1988, in Eckhart Park, Viroqua, WI. After living in several different locations, he was able to make his dreams come true by building on his own “piece of the rock” on 57 acres in Readstown. It was here that he would make his last stand after building a legacy of memories that lasted almost 33 years.

Randy was a proud member of the Viroqua American Legion.

After graduating high school, Randy found work in construction, becoming a journeyman plumber, and eventually moving to “God’s Country”, otherwise known as Wisconsin. There, Randy began a 23-year career working at Fort McCoy, a total force training center. He started as a plumber and then moved to work in the warehouse initially before transferring to transportation as a bus driver. He then worked on the grounds crew before graduating to a place of honor on the range, where weapons training was to be the last stop before the troop’s deployment. Randy was immensely proud of his work and drove 100 miles round trip each day for the privilege of shaping the future of the Army. At age 60, Randy had to lay down his weapons and begrudgingly enter retirement as the effects of the Agent Orange he was exposed to in Vietnam took its toll on his body.

Randy was an outdoorsman, through and through. He loved hunting elk, deer, and mule deer, not to mention a buffalo or bear that happened to wander into his sights. Fishing also was high on his list and was he was no stranger to bringing in countless walleye and muskie. His hunting ran from local acreage to the vistas found in Colorado, South Dakota, and Wyoming. Randy spent countless hours teaching the next generation the joy of hunting and fishing, making sure the pastimes had a solid foundation in the future. When at home he watched his favorite outdoorsman shows and was a fan of the Cubs, Bears, and Bulls. They all took second billing if a western show was on but most definitely if John Wayne was starring in one of his many westerns or if the Mountain Men was on. Randy often quoted The Duke saying, “Courage is being scared to death but saddling up anyway.”

He is preceded in death by his beloved mother, Dolores; his step-dad, Stacey Duncan; his father, Harold Greenman; both his maternal and paternal grandparents; his father-in-law, Sylvester Medernach and his mother-in-law, Janet Medernach; as well as his niece, Caitlin Robinson and many loved family members.

Memories and tributes may be left on the Conley Funeral Home Facebook Page, at www.conleycare.com or mailed in care of Suzzane Greenman, S7227 Hwy. 14/61 Readstown, WI 54652.

2 thoughts on “RANDY A. GREENMAN”