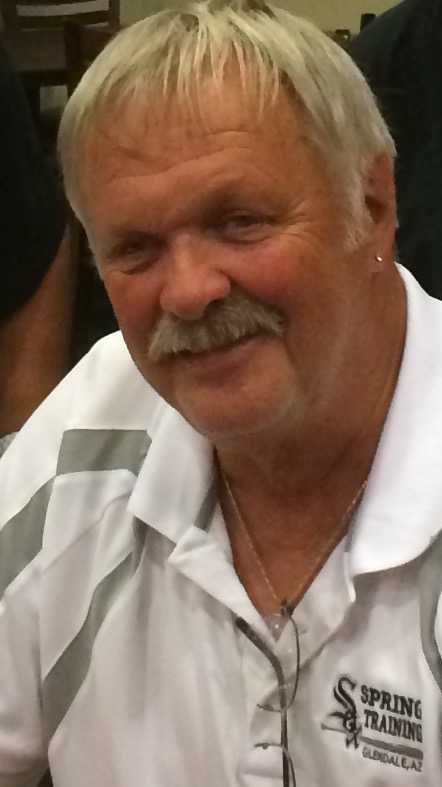 Richard “Rich” Ferdinand, age 66, of Maple Park, formerly of Gilman, passed away at his home, surrounded by the love and prayers of his family, Wednesday, March 2, 2016.
He was born October 3, 1949, in Gilman, IL, the son of Ralph and Jeanette (Davis) Ferdinand.
Rich grew up in Gilman and attended local schools. He graduated from Gilman High School with the class of 1967.
Rich farmed for his dad for many years, but everything changed with a diamondâ€¦a softball diamond to be exact. Rich met the love of his life, Pam Hemenover, on the softball field. Rich was called in as a “ringer” when the team made it to the State Softball Finals. In his day, Rich was one of the top pitchers in the state, but when he first set his eyes on Pam, it was surely a homerun.
They were married a year (and 3,000 softball games) later on February 8, 1975, in DeKalb, IL. When Rich wasnâ€™t helping to raise his two daughters, he kept himself busy working at Wolohans Lumber and later the Elburn Co-Op. He also ran his own business, Ferdinand Painting and Repair for many years, in addition to Apple Tree Travel in Elburn. Rich kept the greens perfect while working at Countryside Golf Course in Malta and Buena Vista in DeKalb (and probably snuck in a few games as well). In recent years, Rich helped keep Kaneland High School running right as a member of the maintenance department.
Rich and Pam made their home in DeKalb for a time before moving to Sycamore. In 1977, the family moved once more to Maple Park.
Rich was a proud member of the Elks Club in DeKalb where he ran the local Elks Golf League and was president of the State Elks Bowling Association as well. He also helped to organize benefit raffles that supported his fellow friends and neighbors in need through the Maple Park Family Fund.
Rich was well known for his community outreach as well as his announcing skills during the annual Maple Park Fun Fest Parade. He had already made a name for himself on the fast pitch softball diamond, but he was no slouch when it came to golfing or bowling either. Rich felt at home in the garden and tended hundreds of flowers and an equal number of vegetables that he shared generously with friends and neighbors alike. His holiday and pool parties were as organized as they were infamous and going out to breakfast was a daily affair. Nothing gave him more joy than the time he spent with his family, especially his grandchildren. He enjoyed adventures at home and to various parks with them, often sneaking in a baseball practice and a ball game or two with Eliahs. Rich also loved fostering Shilohâ€™s dreams of being and artist and a princess. He and Pam enjoyed traveling in the early years to Europe, often leading a group of 20-30 friends. Later, they enjoyed going on cruises and to Mexico and had begun spending winters in Florida. Each spring brought them to Arizona to visit friends and an excursion to spring training camp. His most memorable trip, however, was to Disneyland with the whole family. His shadow was long and many were happy to bask in the peace of his shadow, but Heaven is brighter (and arguably more organized) for his arrival.
He is survived by his loving wife of 41 years, Pam Ferdinand; two daughters Coye (Tomas) Flores and Kelly (Kerry Smith) Ferdinand and two grandchildren: Eliahs and Shiloh Flores.
He is preceded in death by his parents, Ralph and Jeanette Ferdinand.
Visitation will be from 3-8 p.m., with a prayer service to begin at 5 p.m., Monday, March 7, 2016, at St. Mary of the Assumption Catholic Church, 123 S. County Line Rd., Maple Park, IL. A mass to celebrate his faith will begin at 11 a.m., with a visitation preceding mass from 10-10:45 a.m., Tuesday, March 8th, also at the church. Private family interment will follow cremation at a later date.
In lieu of flowers, a memorial has been established to benefit the Maple Park Family Fund. Checks may be made to the “Maple Park Family Fund” and mailed in care of P.O. Box 66, Elburn, 60119. Tributes may also be forwarded to the same address, the Conley Funeral Home Facebook Page or on the web at www.conleycare.com.
The family respectfully asks that NO roses be present in ANY flower arrangement due to a family allergy. Thank you.

Private family interment will follow cremation at a later date.