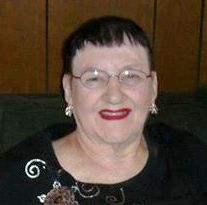 Sally Jane Christensen, age 82, of Overland Park, KS, formerly of Elburn, passed away on Wednesday, December 9, 2015, at Villa St. Joseph. Despite battling health complications for several months, her sunny spirit and determination never dimmed.
She was born November 13, 1933, in Chicago, IL, and was adopted to her loving parents, George and Hilda (Dreyer) Ehrhardt.
Sally grew up in Des Plaines where she attended local schools.
She graduated from Maine Township High School with the class of 1951.
Sally worked as a secretary for a time before losing her heart to Richard “Dick” Christensen, whom she met at the Blue Moon in Elgin. He swept her off her feet and later walked her down the aisle on June 7, 1958. They made their home in Elburn, first renting a place before building their own home, eventually welcoming home their daughter Kim in 1961. Sadness came calling on March 30, 1992, when Dick was called home to the Lord. Sally continued to make Elburn her home, taking over all the details that she and Dick shared until 2012, when she moved to Overland Park, KS, to live with her loving daughter.
Sally was an excellent cook who could make your mouth water in an instant. She and Dick were a great team, taking on household projects that would intimidate lesser couples. Sally and Kim enjoyed travelling, taking in the sights of London and Las Vegas, among others. Country music called to her heart like no other, especially Clint Black, whom she was able to meet at radio station in Kansas City. Whenever a movie caught her eye, Sally and Kim were first in line with their popcorn, ready to take in their next cinematic adventure.
Sally was a member of the Community Congregational Church of Elburn for many years.
She is survived by her daughter Kim Christensen; sisters-in-law, Jane (John) Peters and Janice Christensen; several nieces, nephews and cousins, a close knit group of friends, some dating back to when Sally was just a girl and others she found following high school, including some very special neighbors in Elburn, as well as her “grand-dogs”, Einstein, Zoey and Stormy.
She is preceded in death by her parents, husband Dick, his twin brother in infancy, Russell, one brother-in-law, Gerald Christensen, and her in-laws, Maybelle and Marvin Christensen. She was also preceded in death by her birth parents, Mabel and Edward.

In lieu of flowers, a memorial has been established in Sallyâ€™s name. Checks may be made to the “Sally Christensen Memorial” and mailed in care of P.O. Box 66, Elburn, IL 60119. Tributes may also be forwarded to the same address, the Conley Funeral Home Facebook Page or see her full life story on the web at www.conleycare.com.

Visitation will be from 10-12p.m., with a memorial service to follow at noon, Monday, December 21, 2015, at Conley Funeral Home, 116 W. Pierce St., Elburn, IL 60119. Rev. Dr. Walter Thyng, pastor of the Community Congregational Church of Christ, Elburn, will officiate.