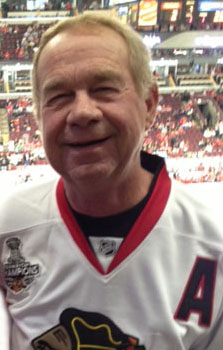 William “Bill” Dorion, age 67, of Hinckley, passed away  Monday morning, December 7, 2020, surrounded by his loved ones.

Bill grew up in Big Rock, IL, and attended local schools. He graduated from Hinckley-Big Rock High School, where he was a proud member of the FFA, with the class of 1971.

Bill met his future wife as a child, but didn’t start dating until high school. The two sweethearts tied the knot on November 6, 1976. They began their new life on the family farm in Big Rock. Eventually they moved to their current home in Hinckley, where they continued to make memories with family and friends.

Bill first worked with his dad at the family business, the Big Rock Grain Elevator. Later he built homes as a contractor before transitioning to maintenance supervisor. He started with Marshall Field’s, which became Target and later Macy’s.

Bill has a 1961 Chevy Corvette which was his pride and joy. He bought it in 1971 and doted on it endlessly, giving it a place of honor in his garage. He loved going out west to Wyoming and the Grand Tetons, as well as Jackson Hole. The mountains held for him a special feeling and brought a measure of peace to a special place in his heart. His granddaughter Evelyn was number 1, even above his beloved Corvette, with everything else coming in with a bullet at number 2. Those times surrounded by his family, which included Bob, “the grand-cat” (whom he complained about endlessly, but loved nonetheless) were his happiest and most treasured. No one loved his family like Bill and his memory will be carried on for generations.

He is survived by his loving wife of 44 years, Joan Dorion; two daughters: Nicole Dorion and Ashley Dorion; one special granddaughter Evelyn Michels; two sisters: Judy (Steve Gayhart) Nagy and Jean Silver; many nieces, nephews and a family of friends.

A celebration to celebrate his life and honor his memory will be held at a later date when all can attend.

In lieu of flowers, contributions may be made in his name to the Big Rock Plowing Match Association: www.bigrockplowingmatch.com/donations, and the Hinckley-Big Rock High School FFA, Chapter IL0177, 700 E. Lincoln Hwy, Hinckley, IL 60520. Tributes and memories may be left on the Conley Funeral Home Facebook Page, or at www.conleycare.com where you can read Bill’s full life story.