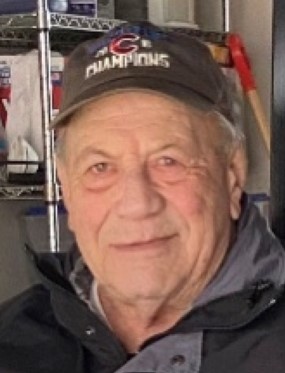 James Michael Fidler, age 81, of Maple Park, IL, passed away at home, surrounded by the love and prayers of his family, Saturday, March 6, 2021.

He was born January 27, 1940, in DeKalb, to loving parents, Joseph and Margaret (Schomer) Fidler.

Jim grew up in Virgil on the family farm and honed his work ethic at a young age.

He attended local schools and graduated from Marmion Military Academy with the class of 1958 where he was the Captain of his company, making his parents proud.

Jim and Sandi Lloyd were united in marriage on March 18, 1983. They began their new life back on the farm and were blessed with a blended family of six children.

Following graduation, he returned to his roots, literally and figuratively, making a lifetime commitment to the lands of his family. Those beautiful acres were passed down from generation to generation, making Jim the fourth generation of Fidler’s to till and tend the family lands.

Jim was a Chicago Cubs fan like no other. His devotion was bone deep and the dedication to his team was unshakeable. He was an avid Donald Trump supporter and loved driving his golf cart but he was never happier than when he walked through his fields. Jim had a generous heart and was first in line to help if you needed anything. No detail escaped his notice and it made Jim a font of information and knowledge on a myriad of subjects, especially farming.  Pearls of wisdom were doled out freely, especially to young farmers looking for the best tips and tricks. He loved nature, flowers and enjoyed planting beautiful blooms each spring. Jim also had a knack for building a fire, much to the chagrin of the unsuspecting local fire department who knew the route to the farm by heart. Jim believed that busy hands were happy hands, and if you didn’t believe him, he could prove it by the hard earned callouses and dirt under his fingernails. His farm was his kingdom and Jim ruled it all with a humble heart full of thanks for the bounty of each harvest. Above all, his family was the key to his happiness. Laughter, love and giving his grandchildren a ride in the tractor proved each time that life is always better when shared with the family he loved so much.

He is survived by his loving wife of almost 38 years, Sandi Fidler; six children: Mary Beth (Kent) Peplow and their daughter, Tara; Patrick (Dawn) Fidler and their sons, Michael and Jimmy; Jennifer Zitko and her two children: Jacob (Stevie Parks) Zitko and Nathan Zitko; Paul Clark and his children Kris and Kayla; Lisa (Brian) Reidl and their children,   Austin and Tyler; and Angela (Ryan) Guarino and their children, Brianna, Peyton, Morgan and Landon Guarino; two siblings: Mary Lee Pitstick and Daniel (Connie) Fidler; two brothers-in law: David Lloyd, and Arthur Lloyd; many nieces, nephews, cousins and friends spread across the countryside who will miss him dearly.

He is preceded in death by his parents, Joseph and Margaret Fidler and one brother-in-law, Richard Pitstick.

In lieu of flowers, a memorial has been established in Jim’s name to benefit the Kane County Young Farmers. Checks may be made to the “James M. Fidler Memorial” and mailed in care of P.O. Box 66, Elburn, 60119. Tributes may also be forwarded to the same address, the Conley Funeral Home Facebook Page, or at www.conleycare.com where you can see Jim’s full life story.