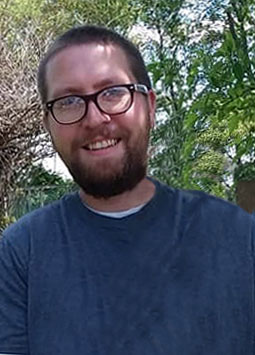 Mitchell Leigh Ward, age 32, of DeKalb, passed away unexpectedly, Monday, May 10, and although he left without being able to say goodbye, his memories are left as a balm to the souls of all who loved him.

He was born September 1, 1988, in Bridport, Dorset, in the UK, the son of loving parents, Christopher and Teresa (Summerfield) Ward.

Mitch was only three months old when he made the trip to the U.S., settling in Schaumburg at first before making a home in Sycamore in 1992.

He graduated from Sycamore High School with the class of 2006.

Mitch met the love of his life, Jami Goodwin, in August of 2011. A mutual friend introduced them and a spark ignited. They were united in marriage on April 8, 2016 and welcomed home a beautiful daughter, Aleigha in 2018.

Mitch had a strong work ethic and balanced schoolwork with part time jobs at Papa Murphy’s, a local pizza place where he became the fastest on record for putting sauce on a pizza, or so he claimed. He also worked with his father for a time in Glendale Heights before working for Sycamore Containers, where he worked his way up to production supervisor.

He was friendly with all he met and more than willing to do what it took to help anyone in need. Dirt bike riding was a passion of Mitch’s since he was 12 and his many races garnered ribbons galore. Street bikes weren’t far behind and trips across the countryside along with his father and other friends made memories with every mile. Pizza and ice cream were daily staples, and no one manned a grill like Mitch. His love for his daughter was limitless. The sun rose and set in Aleigha’s eyes and nothing and no one could ever take her place in his heart. His sense of humor left family and friends with smile on their faces and stitches in their sides. A grin from Mitch could light up a room and leave plenty of space for mischief. All who knew and loved him will grieve his loss. Gone too soon, he lives on through his family and friends.

He is survived by his wife Jami and their daughter Aleigha; his father Christopher (Fiona) Ward and his mother, Teresa Summerfield; Craig Montgomery, a family friend who was a like a dad to Mitch; two siblings: Lisa Ward and Billy Ward; his nephew, Darryl Mull; his paternal grandmother, Sheila Ward and a family of friends.

He is preceded in death by maternal grandparents, Joe and Doll Summerfield.

In lieu of flowers, a memorial has been established in Mitch’s name to benefit his beloved and beautiful daughter. Checks may be made to the “Mitchell L. Ward Memorial” and mailed in care of P.O. Box 66, Elburn, 60119. Tributes and memories may also be forwarded to the same address, the Conley Funeral Home Facebook Page, or at www.conleycare.com.