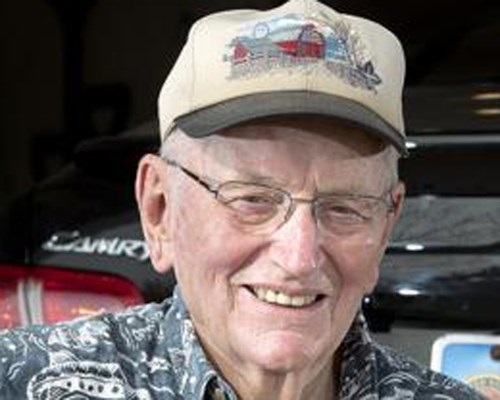 Robert “Bob” Bailey Stouffer, 87, of Dakota Dunes, peacefully finished his life journey at home surrounded by his family on Oct. 22, 2020, after a brief illness.

Bob’s remains will be interred at a later date in Kaneville Township Cemetery at Kaneville, Ill. Conley Funeral Home of Elburn, Il will assistwith arrangements.

Bob was born on Christmas Day, 1932, at the home of his parents, Clark (Bill) and Iola (Youngland) Stouffer in rural York County, near Arborville, Neb. He graduated from Maple Park High School in Maple Park, Ill., after moving from Nebraska with his parents at an early age.

After his discharge he began his 34-year long career working for AT&T as a telephone lineman and ultimately retired from Illinois Bell as a Director of Operations managing emergency telecommunication cable repair teams.

Bob met and married his life partner, Myrna Jean Rees, R.N., on Dec. 9, 1956, after being brought together on a blind date coordinated by their mutual (and sly) life-long friends. Their marriage of nearly 64 years resulted in the birth of three sons, Scott, Stephen, and William.

They spent the majority of their life together in Kaneville, Ill., where they raised their family, had fun with a multitude of friends, supported the community, the Methodist Church, and the local volunteer fire department.

He was preceded in death by his parents, Clark and Iola; his eldest son, Scott; and brother-in-law, Gerald Christensen.

In lieu of flowers, the family requests memorials be made in his name and directed to either Visiting Angels Siouxland www.VisitingAngels.com/siouxland or Hospice of Siouxland www.hospiceofsiouxland.com.