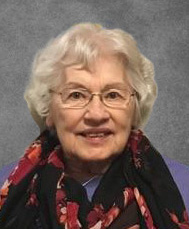 A Celebration of Life Service for Ruth A. Cornell will be held on Tuesday, August 25, 2020, at 1:00 p.m., with a time of visitation from 12 p.m. until the time of service, at Conley Funeral Home, 116 West Pierce Street, Elburn, Illinois 60119 with Mr. Robert Wood and Mr. Doug Olson, officiating.  Ruth’s service will be live-streamed via the Conley Funeral Home Facebook Page.  A private family inurnment will be held following the services.

Ruth A. Cornell, 92 years of age, of Kearney, Nebraska, (formerly of Minden, Nebraska), passed away on Sunday, July 12, 2020, at the Mother Hull Home in Kearney.

Ruth was born May 26, 1928, at Davenport, Iowa, the eldest of seven children to Alfred and Gertrude (Merritt) Tosten.  She received her primary education from Decorah Public Schools in Decorah, Iowa and then graduated as valedictorian of her class from Waukon High School in Waukon, Iowa.  She then pursued higher education attending Bible College for two years in Des Moines, Iowa.

Her first job was at the age of eighteen, when she moved to Omaha, Nebraska, where she worked as a secretary.  Ruth was then employed by Pacific Garden Missions in Chicago, Illinois.  She was a missionary in the Chicago Metro area, where she would go into neighborhoods to speak to families about their children attending Sunday school.  In addition, their mission work would also include helping families with their basic needs.  This work was perfectly suited for Ruth with her strong faith, and caring ways.

Ruth then followed the Lord’s calling to Geneva, Illinois, where she worked as the secretary for the Geneva Junior High School.  At this time of her life, she met the love of her life, David F. Cornell at The Pentecostal Church of Geneva.  On August 18, 1962, they were united in marriage in Geneva.  To this union two children were born:  Sandra and Rodney.  In the first few years of their life together they made their home in several states to be near family until settling to St. Charles, Illinois.

In later years, she and David moved to Nebraska to be near their son, Rodney.  They resided in Minden, Nebraska, where they enjoyed their church fellowship with the local congregation of Global Missions.

On October 20, 2003, she was preceded in death by her husband, David.  Ruth continued to make her home in Minden until moving to Homestead Assisted Living in 2014, and then began to make her home at Mother Hull in Kearney due to health issues in August of 2016.

Ruth enjoyed knitting, crocheting, reading, and was always curious about what was going on with her families’ lives, especially her grandchildren.  Ruth’s passion for following God’s will in her life was very important to her.  This was seen in many ways, but no more so than the countless hours of prayers for those that God had shown her were in need of prayer.  Throughout the years, she and David also enjoyed traveling to attend church camps around the country and Canada.

A memorial has been established in Ruth’s honor, and kindly suggested to the Mother Hull Home in Kearney, Nebraska.

To View The Service, Copy and Paste This Link Into Your Browser or just click below: