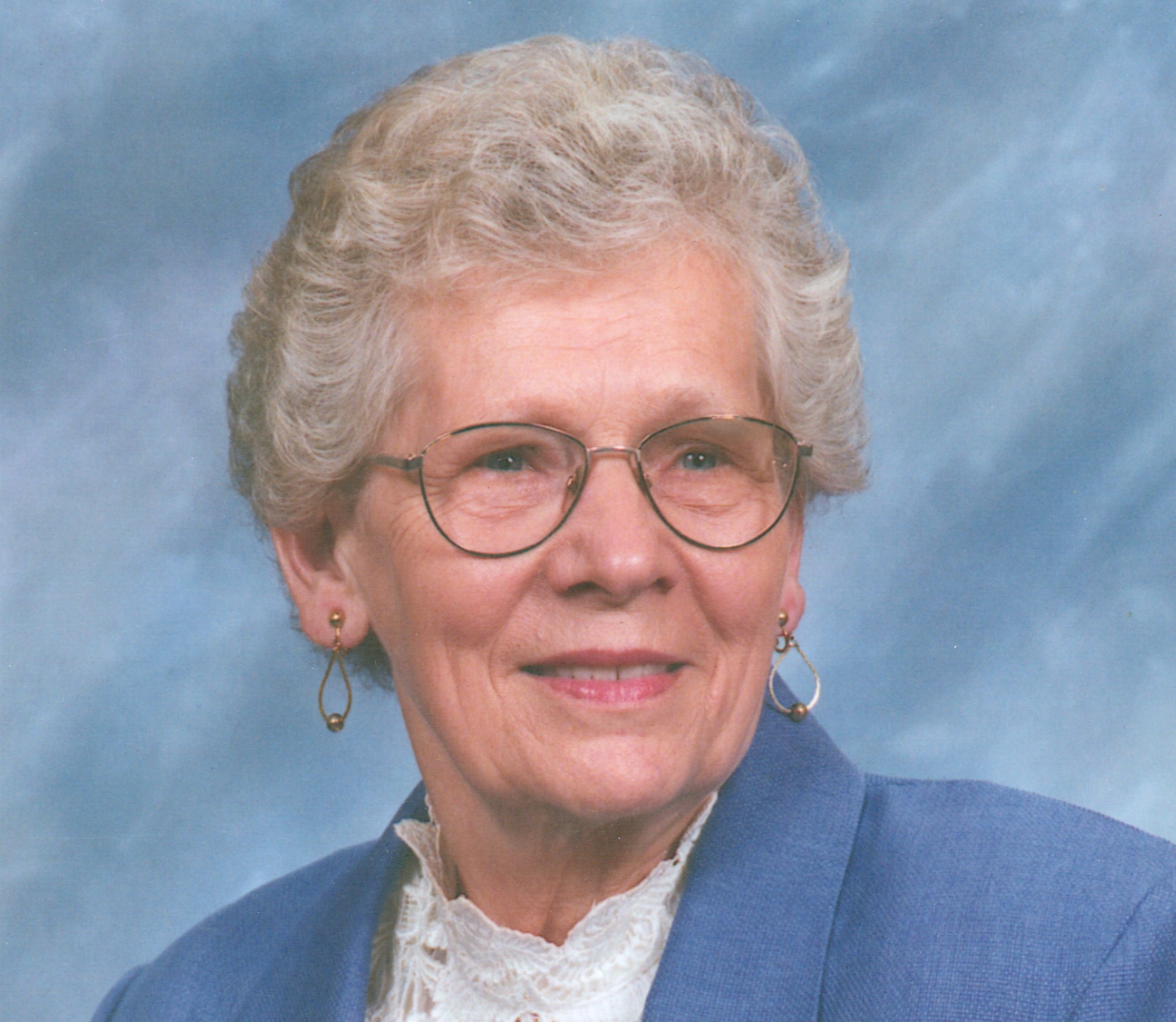 Theresa C. Mangers, age 91, of Elburn, IL, passed away in the evening of Wednesday, June 6, 2018 surrounded by the love and prayers of her family.
Theresa was born in Roseland, NE, on May 18, 1927, to proud parents Harry and Helena (Miller) Klein.
She attended Cloverdale Country School and graduated from Roseland High School.
After graduation, Theresa attended Hastings College, where she took the required courses to teach. Theresa taught all 8 grades in a one room school house.
As fate would have it, Theresa was attending a night out dancing at Libs Park in Hastings, and ran in to Richard “Rick” Mangers. They danced the night away and swayed into a two year courtship, after which they were engaged to marry.
Before they could have their wedding day, Rick was called by the Army to serve. Upon his return, Theresa and Rick were united in marriage December 28, 1946 on a cold and snowy day.
In 1949, the happily married couple decided to start a family of their own and made their home on a farm north of Holstein. After four years, Theresa and her growing family moved to Illinois in the fall of 1953 to a farm in Aurora on Sullivan Road.
Theresa was a beautiful seamstress and would make clothes for all their six children, though she was usually sewing more clothes for the girls. Theresa even made her daughtersâ€™ wedding dresses when their special day came.
When she wasnâ€™t sewing, Theresa was often found in the garden, tending to and picking things for her annual canning. While she wasnâ€™t outside tending to her garden, Theresa made sure if Rick needed help, that she was there when he needed it. In her spare time, Theresa loved creating crafts and ceramic pieces.
As the children grew up, Theresa worked part time at Mooseheart working the word processor and other various office duties.
Both Theresa and Rick retired in 1988 and moved to Nottingham Woods near Elburn. They had many fun picnics and Christmas seasons there. While living there, Theresa would often walk around Nottingham Woods alongside her friends
Theresa and Rick had a love like no other, for each other and their family. Rick and Theresa celebrated their 50th wedding anniversary on September 8, 1996 with a Mass and reception with friends and family before Rick passed away on April 26, 1997.
Theresa loved the Lord and was always busy working with the church as a member of the Altar and Rosary Society. She went to church every day and would walk alongside her friends to Mass.
Theresa had a strong work ethic and got a job at the Kaneville Community Child Center and enjoyed being surrounded by children. She was always a helpful and giving person. In 2005, Theresa received â€˜Volunteer of the Yearâ€™ award of St. Gallâ€™s Parish. She made meals for others, would visit the home bound, and cared for the sick. Theresa made time for everyone, including her family.
In 2007, Theresa celebrated her 80th birthday with friends and family at Fishermanâ€™s Inn. Two years later, she moved to a condo in Elburn and shortly after to the Grand Victorian in Sycamore.
Theresa always loved getting together with her family for many Christmas seasons, weddings, and birthdays to celebrate.
In 2014, Theresa moved to the Dekalb Nursing Center due to declining health. She made many new friends and sometimes would try to even help the nurses. She always enjoyed singing with the ladies, chats with Brad and Matt, and all her visits from her family. Theresa spent the rest of her days there, only to pass away from bladder cancer to be with her lord. She is now in the arms of her Savior and patiently awaits the resurrection.
Theresa is survived by six children: Linda (the late Don) Meyer, Roger (Gayla) Mangers, Beverly (Gary) Rissman, Betty (Mark) Ringhouse, Kenneth (Margaret) Mangers, William (Noel) Mangers; twenty grandchildren: Scott Meyer, Brent Meyer, Russ (Bonnie) Meyer, Kevin Meyer, Tracey (Timothy) Dryer, Kristie (Peter) Gerosa, Michelle Rissman, Brian (Megan) Rissman, Jeff (Shannon) Rissman, Kelly Anderson (Jason Kruse), Chad (Kathy) Hamblen, Clint (Katie) Hamblen, Zachary Ringhouse (Brittney Boettcher), Melissa (Matthew) McIntyre, Richard (Shawn) Mangers, Jacqueline (Paul) Neumann, Bethany Mangers, Christopher Mangers, Chassidy (Curtis) Lubic, McKinzie (Scott) Mitchell; 30 great grandchildren, Ashley, Jessica, and Kyle Meyer, Tim Meyer, Aaron, Donnie, and Chloe Meyer, William Dryer, Rowen and Charlie Gerosa, Lane Rissman (Brianna Henry), Coleton and Griffin Rissman, Dale and Thomas Rissman, Saige (Morgan) Anderson, Trevor (Kaylyn) Anderson, Brittany Anderson, Morgan, Kennedy, and Skylar Hamblen, Luke and Ava Hamblen, Braydon Ringhouse, Addison McIntyre, Lauren and James Mangers, Everly and Jackson Neumann; one great-great grandchild, Rhett Anderson; her sister, Lillian Consbruck; many nieces and nephews.

She is preceded in death by her beloved husband of 50 years, Richard Mangers; her parents, Harry and Helena (Miller) Klein; two brothers: Bill (Marie) Klein and Everett (Lorene) Klein; her sister, Aileen (Peter) Bonifas; her brother-in-law, Leonard Consbruck; a son-in-law, Donald Meyer; her great grandson, Travis Meyer.
Visitation will be on Monday, June 11, 2018, at St. Gall Catholic Church, 43W885 Hughes Rd., Elburn, IL 60119, from 4:00-7:00 p.m. A funeral Mass to celebrate her faith will be held at 1 p.m., Tuesday, June 12, at St. Gall Catholic Church with an internment to follow.
In lieu of flowers, a memorial has been established in Theresaâ€™s name. Checks may be made to the “Theresa Mangers Memorial” and mailed in care of P.O. Box 66, Elburn, 60119. Tributes may also be forwarded to the same address, the Conley Funeral Home Facebook Page, or at www.conleycare.com.